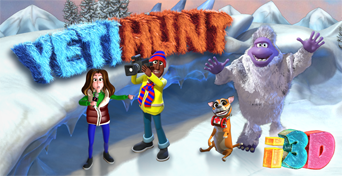 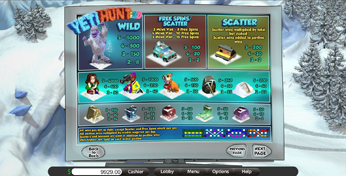 As mentioned earlier, Yeti Hunt is already the second 3-dimensional . It may look unusual to a player who has never played a 3D slot before. It can get pretty confusing but that only lasts for a little while when you realize that it’s exactly like the normal slot except that the reels are on the floor, and the icons are standing up. On the lower left side, you will see a small hut where in the reporters are camped out. On the antenna/transmitter, you will see the number of lines you’re playing with. And through the door, out comes the amount that you win per spin. The news van is also pretty generous with its free spins. For 3 vans that appear on the reels, you will get 8 free spins. 10 free spins for 4 news vans, and then 15 free spins for 5 news vans. It might be hard to activate this feature but be patient and you will activate it sooner than you think! It’s fairly easy to get the Random Wild icon here in Yeti Hunt. In one game, I think the random cloud appeared 4 times. It’s this dark cloud that snows on a symbol making it Wild. This is probably the most liked feature of the game as it gives players more chances of winning more. But take note also that this feature cannot be activated during free spins. Don’t underestimate the pastel color palette and all the fur of this game. Although it has happy colors, and looks like a famous movie animation, it is hard-core fun!!!
play
yeti hunt i3D

Is it real? Or is it just a legend? That is what these two reporters from channel nine are aiming to find out ! Help these reporters brave the ice and cold in the Himalayas and do everything in their powers to catch a glimpse of the famous Yeti! And another interesting trivia behind this game "Skylar" the dog! He is actually the dog of BetOnSoft's competition winner! And she chose to have her dog featured in a BetOnSoft game! That's pretty cool!

This 5-reel, 9 lines attractive video slot is already BetOnSoftÃ¢â‚¬â„¢s second i3D video slot. It's a world on ice and snow with lots of cool features aside from being 3-dimensional. Click on the paytable and you will see a television screen swipe down showing the icons and what they stand for. Let's get started with the icons. The huge, furry but too-cute-to-be-scary Yeti is the Wild. It substitutes any symbol except the scatter. The news van is the free spins / scatters which can give you up to 15 free spins when you get 5 news vans on the reels. The Polaroid is the scatter. Scatter wins are multiplied by total bet stalked and added to payline wins. You might be able to see a dark animated cloud appear from time to time. This is the Random Wild. ItÃ¢â‚¬â„¢s a cool surprise icon that randomly appears then turns a symbol into a Wild for that particular spin. Other symbols in this video slot are of course the female reporter, the camera man, Skylar the cute special guest hunt dog, a back pack with ice tools, a Yeti's footprint, and the letters A, K, Q, J, and the number 10. A player can win a maximum of 40K coins in this game.