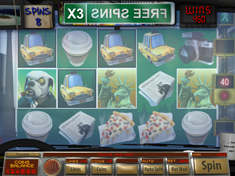 Tails of New York is one of BetOnSoft’s most popular games. And once you start playing with it you will see why. First of all, the 3D graphics are really nicely and smoothly done.Ã‚Â The colors used are very much alive. The animation of each icons are very smooth too. The complete picture will really make you want to go to New York. Also, it’ll make you crave for pizza,Ã‚Â coffee, and some Chinese food. The background is very New York with its street signs, huge jumbotron screens and night lights. Two features of this game that stand out are the extra random wild and the Chow Run game. The Extra Random Wild, aside from it being very essential in completing more winning combinations, it’s also a delight to watch. Once the normal icons are photographed by Buddy, they become more interesting… or chaotic for that matter. For example, the cup of coffee to go becomes a spilled cup of coffee. The yellow cab turns into a cab that hits a water hydrant, etc. The Chow Run feature game is the second best feature of this game. It runs very smoothly. In this game, Buddy is tasked to take 3 photos of Mr. Chow moving some suspicious items that turn out to be for auction. And Buddy has to take these photos without being caught. There are a bunch of expensive items you can see there and you have to choose wisely on which 3 items you want to take a photo of. These items actually reveal a corresponding amount that you will win once the feature game ends. The good news is that it’s not that hard to trigger this game. If you also pay close attention to detail, BetOnSoft obviously had fun adding fun small somethings around the game. Small things like the stop light on the upper right that turns yellow when the reels are still spinning, then turns green once you can start spinning again. And red when you have stopped spinning. Thesae are very small details but it definitely completes the whole experience. I have to say this is one of BetOnSoft’s finest video slots. Every detail in this game was well made. And they made sure not to forget filling it up with fun features that will really get you addicted to this game.
play
Tails of NewYork

Welcome to the city of concrete jungle otherwise known as New York City! The theme of this game is quite interesting. Think Peter Parker, a photographer in the big city who works hard to get the biggest scoop through his photos. Except that his name is Buddy and he’s a dog. And he doesn’t have any super powers too. Just the amazing talent of capturing photos of some crazy characters that will most probably make the headlines!

Tails of New York, a non-progressive 40 line video slot, is one of the most attractive BetOnSoft games which does not only have really good graphics but have fun and exciting features as well.

Buddy is the wild icon. He substitutes anything except the scatter. Any wins from Buddy doubles your wins. Get ready to smile when you get him in the reels! He will take a photo of you!

Chow’s Van is the Scatter. Getting 3 more vans on the reels will trigger the fun and exciting feature game called Chow’s Run. More on this later. Wins from this cool feature game are multiplied by total bet staked but are not multiplied by the free spins multipler.

Last but not the least is the Extra Random Wild feature! And that is still Buddy who randomly appears out of nowhere on the corners of the slot and takes a photo of a symbol, which turns that symbol into a wild for that spin. Basically he transforms certain symbols into wilds to complete a winning combination. Buddy the hero! Thanks to Buddy, a player can win up to 70,000 coins here!