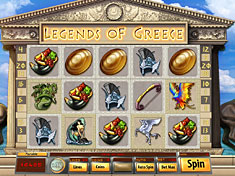 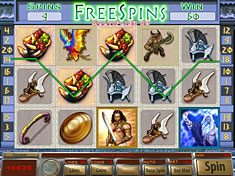 Legends of Greece may seem like a simple video slot but it actually has a few surprises up its sleeve. A lot of player’s testimonies indicate how they love the tiny bits of surprises they encounter while playing the game. It’s one of the main reasons why they keep coming back to play. Players enjoy the animation of the characters whenever they win combinations. Once you start playing it’s such suspense until you see these gods and goddesses do their thing. It seems like a long time before a combination comes to play but once it does, you’ll be showered well with coins! One of which is the Medusa combination (3 or more Medusas on the combination). When you get a Medusa combination, the background suddenly turns into a dark scene with a glowing green beam. This means you just won free spins with a x3 multiplier. Players can win more a minimum of 50 coins from the free spins alone. Watch out for the mighty Zeus because he will substitute other icons. All with the exception of Medusa and Perseus. Perseus on the other hand can give you scatters so you’d want to get this combination as well. Legends of Greece is one of the featured games of this online casino. Not only are there a lot of fans of Greek mythology, but this game has its own powers of charming its way through players. With the mesmerizing game characters and it’s great value combinations, It’s really has been one of the most played video slots here in Atlantis Gold.
play
legends of greece

Legends of Greece is a video slot that is set in the mythical world of Greek Mythology. Spin a wall of Greek tablets carved with images of the great gods, goddesses, and creatures that once ruled the world of Ancient Greece. From Hercules, to Medusa, to the great Zeus and more. Get that mystic feeling from the colourful graphics partnered with very relaxing and heavenly music while spinning your luck. But don't let this fool you, Legends of Greece can be one thrilling video slot that can get you on the edge of your seat!

Greek mythology has always been a popular theme due to its intriguing mythical characters and the stories revolving around them. It's a magical world of family drama making for a great video slot. There's always another twist of fate just around the corner. The small details of Ancient Greece such as the old style font of the numbers on the sides of the slot add a good ancient touch to it.

Legends of Greece is a non-progressive 5 coin video slot that has 20 lines giving players lots of chances to complete different winning combinations. Aside from this, players can also get a couple of wilds and scatters making it possible to win up to a whopping 30,000 coins. That's legendary!